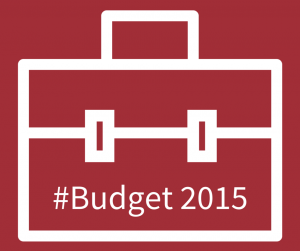 Last week’s Summer Budget 2015 promises bold reforms on tax and welfare, and introduces a National Living Wage, underpinning the government’s intention to reward work and support aspiration.  But what does this mean in reality?

As promised at A4C we’ve highlighted below the key points in the budget which are most likely to impact our clients.

The government wants to re-visit IR35 to find a solution that protects the Exchequer and improves fairness in the system.  This means that individuals choosing to work through their own limited company, where they would have been employees if they were providing their services directly, will be under greater pressure to pay the same tax and National Insurance as other employees.

From April 2016 the government will remove the Dividend Tax Credit and replace it with a new tax-free Dividend Allowance of £5,000 a year for all taxpayers.  The government will set the dividend tax rates at 7.5% for basic rate taxpayers, 32.5% for higher rate taxpayers and 38.1% for additional rate taxpayers. While these rates remain below the main rates of income tax, those who receive significant dividend income – for example due to very large shareholdings (typically more than £140,000) or as a result of receiving significant dividends through a closed company – will pay more.

The government will review the rules underlying the tax treatment of travel and subsistence expenses for workers engaged through an employment intermediary, such as an umbrella company or a personal service company. The changes will take effect from 6 April 2016.

The majority of individuals and businesses pay their fair share of tax however, there are some who fail to pay what they owe.   To improve tax compliance among small businesses, the government announced in the Summer Budget 2015 that it will legislate to give HMRC the power to acquire data from online business intermediaries and electronic payment providers to help identify businesses that are trading but not declaring or paying tax. HMRC will consult on these proposals in July 2015.

End of the tax return?

Small businesses will be able to manage their tax through a digital account linked to business software. HMRC will begin discussions with businesses and software providers about how best to integrate tax reporting and payment with everyday business activity.

The government will legislate to set a ceiling for the main rates of income tax, the standard and reduced rates of VAT, and employer and employee (Class 1) NICs rates, ensuring that they cannot rise above their current (2015-16) levels. The tax lock will also ensure that the NICs Upper Earnings Limit cannot rise above the income tax higher rate threshold; and will prevent the relevant statutory provisions being used to remove any items from the zero rate of VAT and reduced rate of VAT for the duration of this Parliament.

Summer Budget 2015 – The other headlines:

Many of these headline changes are subject to a consultation process, which will then provide the detail supporting the new rules and changes.  In the meantime if you want to read the Summer Budget 2015 for yourself then visit https://www.gov.uk/government/publications/summer-budget-2015.

Of course as further information becomes available, following this Summer Budget 2015, we will analyse the implications, however if you have any questions in the meantime feel free to get in touch with Esther or Natasha on