Watching TV the other day and one of those annoying shampoo ads came on. You know, the ones where they get gorgeous girls to stand in front of the camera, hair blowing behind them?

The Daily Mail have revealed the secrets and it involves some very tight green lycra and a whole lot of weirdness! 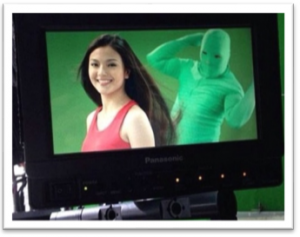 These people (I’m not making this up!) are often hired to stand behind the model and flick her hair.

Yes you read that right, flick her hair!

When I started to read the article it made me laugh- what an odd job!

But it turns out it’s quite common in the world of green screen.

Is it a plane?

(…with his Greenscreen fluffers!)

People dressed head to toe in green lycra stand behind Superman, pulling on strings to move his cape so that it flaps in the wind!

Now, I had no idea about these Greenscreen fluffers but apparently it’s a well-known trick in the advertising world.

It just goes to show the amazing variety of jobs there are available and how it’s possible to use people hidden behind the scenes to achieve the desired outcome.

Do you need a fluffer?

At A4C, we promise not to wear green lycra but if you need your business finances to be seamlessly managed in the background then speak to Esther or Natasha about our outsourcing options.